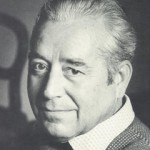 Bruno Cassinari, born in Piacenza in 1912, moved to Milan in 1929, where he was intensely active ever since he joined the group “Corrente”. His love for the French coast and, earlier still, for the native countryside convinced him to alternate with a different environment to his studio in Via San Tomaso. This involved, on one hand, Antibes, which meant that Cassinari from 1949 to 1953 personally met Picasso – whom he was called by to exhibit at the Musée d’Antibes in the summer 1950 –, as well as Georges Braque, Marc Chagall, Paul Eluard, Jean Cocteau. But, above all, the Mediterranean stay implied that his painting met with the breath and the colours of the sea, marking an especially creative phase. On the other hand, it involved Gropparello, his ancient mother ground, reclaimed from 1962 onwards, when Cassinari reopened his studio together with Ernesto Treccani, two years after his mother’s death. From that moment, his work in the country setting, which he had already investigated in the Forties, re-emerged with a new unsteady, burning twist. Every location was reinterpreted through the power of colour, trait that since the very beginning of his career attracted critics – i.e. Elio Vittorini with his unforgettable comments in 1941 – and premature international recognition: in the Fifties, Cassinari’s work not only was receiving tributes at La Biennale di Venezia (1952), but was also renowned on the international artistic circle for the artist’s participation in influential exhibitions in the United States (1952; 1957), in Australia (1956), in South America (1957).

Secular portraitist  – famous are the pictures of Gina Lollobrigida (1955) and Carla Fracci (1958) – and, at the same time, painter of the sacred –  the glass windows in San Domenico in  Siena are his (1982) –, Cassinari dedicated his life to art for over fifty years with great passion and devotion. He died in Milan in 1992 in his studio, where he left traces of his artistic inclination in the unfinished canvases, in his beloved antiques, in his sketches and the colour trails on the walls.